I’ll bet you’re looking for a way to create some virtual team building activities for your staff. With offices being virtual now, remote employees find themselves feeling emotionally distanced from their co-workers and missing out on the “water cooler” socializing that comes with physically being in an office.

At Bell Media, our employees are no different. Although we are a digital advertising agency and were already set up to work from home, socializing remained an elusive activity for us, like many of you.

We scoured the internet, looking for articles on boosting employee morale, and all we found were bland articles that advised “make sure you do video conferencing” and “reach out to your remote employees and check in on them.” Like you’re not doing that already? Geez.

We recently tested out some virtual team building activities, and because they worked out so well, we wanted to share them with you all. With a little planning and some ingenuity, you’ll be bringing your teams together again – virtually – in no time. 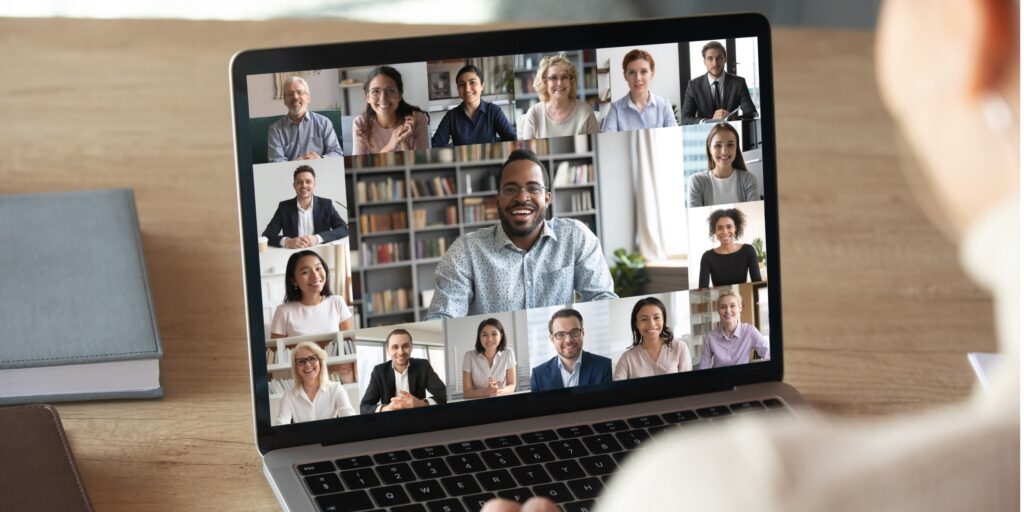 In-person get-togethers were out of the question for 2020

Thanks to the coronavirus, our annual team-building gathering, “Level Up,” was canceled. “Level Up” was when all of our offices came to one central location, and we did a variety of team-building activities. Since Level Up usually takes place in early November, this was obviously not going to happen in 2020.

Still, we were determined to celebrate our accomplishments over the past year and have some fun along the way. Level Up was always a time our employees got a chance to socialize with co-workers from other offices and build lasting relationships that significantly improved our morale, our collaboration on future projects, and our overall culture.

So it was with all these things in mind that “Virtual Level Up” was born. It was conceived to be a week-long celebration, with events happening each day that would entertain and delight our staff while bringing everyone together to build virtual team-building activities. Our employees told us that they loved it, and it had such an impact, we intend to continue some of these activities monthly while we are all still working remotely.

For some activities, we took the “free” route and took advantage of some of our employees’ hobbies and personal expertise areas. Other activities were paid virtual get-togethers. The combination of the two worked great for our teams, and we hope you’ll take something away from it too.

Here is what our week-long agenda for “Level Up” looked like:

Before Virtual Level Up week, we went through and reserved time on all our employees’ calendars for the week’s events, without telling them what they were for. We announced Virtual Level Up and gave out teasers that would intrigue the employees of what was to come.

We then sent out the schedule to all employees, providing them detail on each activity and “teasing” the upcoming events.

Our management team got together and decided to write a handwritten thank-you note to every employee in the company and mail it so that it was timed for them to receive it on Monday.

Our first event happened on Monday at noon, and the topic was “Meditation and Staying Present.” This was presented via a Zoom meeting by Steve Sartino, one of our senior managers who had been heavily into meditation for years. In this hour-long session, Steve gave a presentation on what meditation was, what it was not, and how it was scientifically proven to lower blood pressure, stress levels and create a positive outlook for your day. We ended the hour by doing a guided meditation from YouTube.

Tuesday was the business part of Virtual Level Up, where we had our “year in review” presentations from all managers. At the end of the business updates, our management team gave out awards. The first set of awards were management-chosen, and our employees voted on the second set of awards. We had an unbelievable 99% voting rate from all our employees, and these awards were so meaningful. Our design team created custom award certificates for each award winner, which were then mailed to each employee’s home.

Wednesday, we held a virtual escape room Team Challenge with a company named Green Hat People. We did a quick overview meeting and then broke up into nine different teams, where we had a scenario that someone had broken into Bell Media’s servers and hacked all our files. Each team had to solve a series of puzzles to regain access to our files. Throughout the game, the hacker would taunt our teams and give an occasional hint. After this 45 minute game, each team found out whether or not they had “broken out” of the virtual challenge, and the winning team members each received a $10 Amazon card. All of us agreed it was great fun. We built the teams to consist of employees who didn’t usually work together, so everyone got to work with someone they didn’t know very well, creating an authentic bonding experience.

Said Allison Freeman, member of the winning “break out” team: “The team challenge escape room was a fantastic idea. We were able to connect with team members we haven’t seen since March and put our brain power together to find our way out of each room. Through a lot of laughs and “let’s go with it” answers along the way we were able to pull through with the big win!”

Immediately following the Team Challenge was a bourbon tasting experience. This was put on by two of our major bourbon aficionados employees and exceptionally experienced with a large variety of different bourbons. They made up gift bags that contained three small bottles of bourbon, each marked with different colors. The gift bags also had large ice cube containers and a small mixture of liquid to create an “Old Fashioned” drink. The way the bourbon tasting worked:  they described three different bourbons; the “nose” you would smell, the various flavors you could detect from each bourbon (i.e., honeysuckle, charred wood, honey, vanilla, etc.). Then they described the “finish” – the flavor the bourbon leaves in your mouth after it’s swallowed, and how far down your throat the warmth would be. Based on these descriptions, you had to taste each small sample bottle and then jot down which color went with its description. The winner (the first person to type their choices into our Zoom meeting) won a Patagonia pullover. Then, we used the leftover bourbon to mix with the “Old Fashioned” syrup, and we stayed after on the Zoom call and socialized for about an hour. Talk about fun!!

We had two significant events this day. The first event was presided over by our EVP Nathan Yates. We joined a Zoom call, and Nathan again thanked all of us for all our hard work during these trying times since March. Then, he announced that the company was presenting every employee with a gift, where they got to choose an “experience.” The experiences ranged from a round of golf, a spa experience, or a gift card to an airline or hotel of their choice, Amazon, or UberEats. Everyone was so surprised and delighted.

Later that afternoon, we were treated to “Comedy and Cocktails.” One of our employees, Kristin Gilmore, is a stand-up comedian on the side. Another employee, Matt Carter, created a Bell Media cocktail for us, matching our company colors, and garnished it with different items representing some of our manager’s personalities. Between cocktail building, Kristin cracked us up with a comedy set that had everyone laughing like crazy. It was terrific to see Kristin, a pretty reserved individual, come out of her shell and become this hilarious comedian! Everyone enjoyed this activity very much.

On Friday, we had arranged to have an assortment of delicious homemade cookies delivered to each person’s home from Insomnia Cookies, a well-known Birmingham-based cookie store. Most companies would probably give everyone a half-day off from work that afternoon, but because our company has a flexible vacation policy, people could already take off whenever they wanted – and many employees did choose to take off that afternoon.

Our employees made it clear that they loved Virtual Level Up. And I think all of us managers realized how very much we had been missing the type of social interaction we were able to have with all the activities we organized.

Virtual Level Up was such a success that we have vowed to do at least one virtual team building activity per month going forward to keep up the positive employee morale momentum we’d gained.

We hope our Virtual Level Up week-long set of activities will help you build out your own week of fun and celebrations during the holiday season and all through 2021. It was the boost in the arm we needed after eight months of remote working, and I suspect it will be for your teams, as well.